Auterion Tops the Contribution Rankings to the PX4 Ecosystem

Dronecode’s 2018 Community Report is out, and we are excited that during the last year Auterion has been responsible for around ⅓ of contributions, with our success heavily influencing progress in several technology areas.
PX4 is hosted under the Linux Foundation as part of Dronecode, which serves as the vendor-neutral home for PX4 and its surrounding ecosystem of projects such as QGroundControl and the SDK.
We are glad to see that the bulk of contributions are coming from a highly diverse and very collaborative pool of developers that form the backbone of the community. 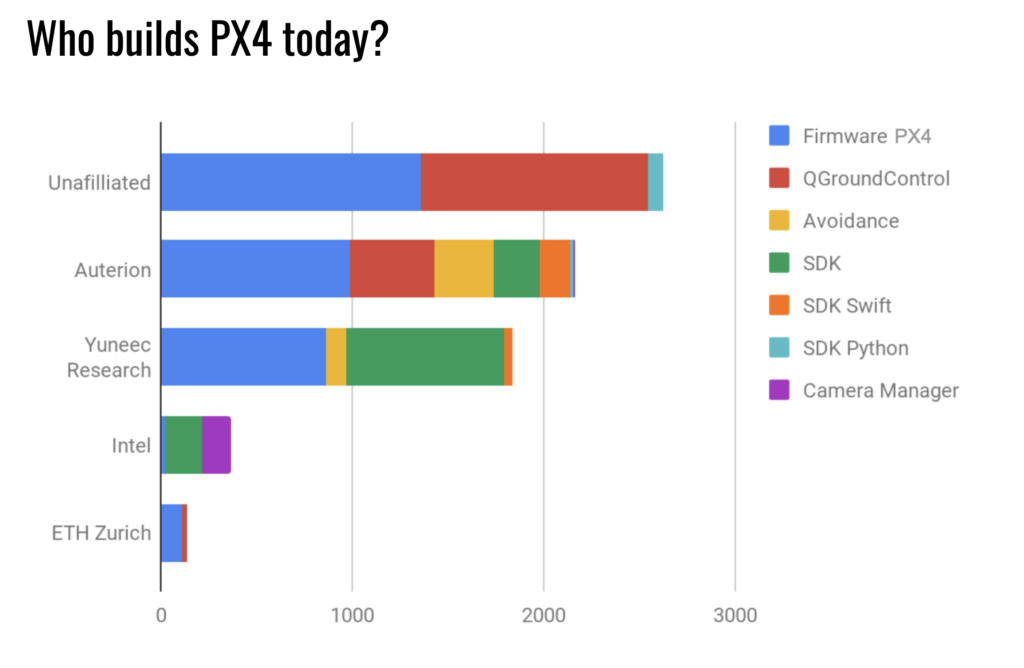 The Auterion engineering team was active across all projects. The majority of contributions were in improving PX4 and making QGC more user-friendly. The computer vision domain and SDK come right next.

First, the Auterion team was responsible for the large majority of the contributions in the computer vision domain, in particular for more reliable and well-grounded obstacle avoidance and collision prevention. Throughout the year, the team contributed heavily on automated obstacle avoidance, the feature that enables autonomous vehicles to detect and to navigate around obstacles when following a pre-planned path. A lot of effort was also invested in the progression of collision prevention, the capability that is used to automatically slow down and stop a vehicle before it collides into an obstacle. These improvements enable end-users to fly with more confidence, with the knowledge that the new autonomy capabilities will kick in to prevent collisions.

Second, Auterion’s flight control team contributed to the new smoothing trajectory feature that enables a smooth transition through waypoints. This contribution improves the UX of drones to the end-user and brings the PX4 stack closer to productization. The smoother flight looks visibly more intuitive to the operator and provides a more stable motion. This leads to better video and avoids motion blur for survey pictures.

Finally, the evolution of the SDK represents a significant contribution to the community from Auterion. Every single use case involving a drone requires a ground station or a connection to the cloud. With the SDK we want to provide a high level, user-friendly API to developers so that they build applications that scale to the whole PX4 ecosystem. The SDK is open and extensible, supporting different programming languages such as C++, Java, Swift, and Python. If you want to learn more about the SDK you can have a read at this blog post and review the recording of our webinar.

We are thrilled about the commitment and coordination of the developers in the open source community and we hope that many more will join the over 400 contributors worldwide in bringing cutting edge technology to the growing drone industry!
For more highlights, including releases, flight tests, and contributor breakdowns, view the full report here: https://www.dronecode.org/2018-community-report. To get in touch with the other developers and start contributing visit: http://discuss.px4.io.